Ryan has just completed his Advanced Apprenticeship with ITEC and is an ICT technical professional working with a local employer.

Ryan has considered taking part in the London to Brighton bike ride a couple of times but has been put off by the crowds of people on the start and finish lines making it difficult to get going followed by the difficulty of getting back home from Brighton.    So in early summer 2016, when he and his brother were once again considering entering the run, they decided to create their own challenge.

Ryan says “We decided to increase the challenge and ride over 100 miles to Norwich, double the distance to Brighton.   We only had a few weeks to train as we hadn’t cycled much over the past 12 months and we missed a lot of training days because of bad weather, so we knew we had a difficult time ahead.   We were also doing the ride on mountain bikes which certainly added to the physical challenge on the day.”It was important to us that we supported a local cause and our chosen charity was South Essex Wildlife Hospital in Grays, who rescue and rehabilitate Britain’s wild animals.   We chose SEWH for the following reasons:

Our donation from our supporters, who include ITEC, will go towards: 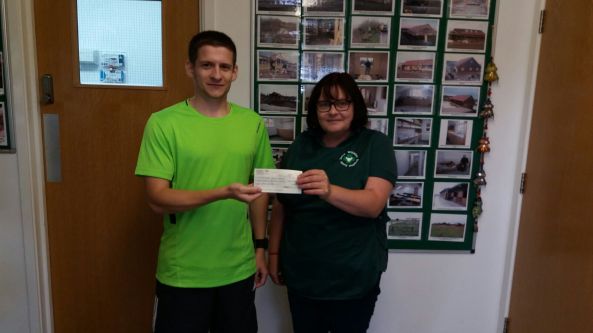 How did it feel?

Ryan says “Leading up to the ride we were mostly excited, although we were a little concerned as it got closer and closer because we knew we had not done much training.   In the two weeks leading up to the rider we were frantically buying bike accessories on eBay,, such as storage bottles and frame pannier bags, to use to carry essential tools, food, vacuum-packed clothes and battery packs.
We were checking on the weather stats for the weekend and they seemed to be getting progressively worse with suspected thunder showers!”

Their bikes were pre-packed and ready to go by the night before so on the morning of the ride they were up at the crack of dawn, had a wholesome breakfast and set off towards Norwich at about 6:30am, to make the best use of the daylight.   After 9 hours of cycling and a pit stop or two for food and water, plus a longer one for a puncture repair (as well as a couple of stops for admiring the scenery and taking a photo or two), they finally arrived at their hotel in Norwich some thirteen and a half hours later.

Ryan continues “The first 30 miles really seemed to fly by but the journey was mostly uphill and we definitely started noticing it in our legs after the halfway mark.   We even had a thundershower following us for about an hour that did eventually catch us up to ensure we got a soaking!   The hills were getting progressively harder as we approached the last 40 miles and, at this point, it seemed the miles were ticking by very slowly but knowing people had donated to the cause kept us motivated.”

Ryan summarises “Overall, it was great fun and we did have a really interesting and challenging ride. We were mostly in the middle of nowhere going through fields and forest paths and we did see some lovely quaint villages that we wouldn’t normally get to see”.

So what next for our intrepid apprentice?

Ryan jokes “Next time we will have to up the ante and ride a lot further, maybe to Snowdon in Wales or from East to West coast!   I have set myself some interesting, and exhausting, physical challenges this year.   In September I took part in the Nuclear Blackout Obstacle course race, which is 5K laps of running, crawling, various obstacles, swimming, etc., within a 2-hour time limit in the dark, lit only by competitors’ head torches!  I lived to tell the tale!  In November I plan to take part in the Nuclear Fallout event, which will be a 12K race through similar terrain but in freezing temperatures, where hypothermia is a potential risk.  What am I thinking?!”

Ryan is an excellent role model for today’s new apprentices.  He’s busy holding down a full time job, while completing his apprenticeship and while taking on his personal challenges to raise money for charity.  Well done, Ryan, we are so proud of you!