The Apprentice Levy – What does it mean for employers?

The Apprenticeship Levy is coming in April 2017.   Every employer in England will be eligible to pay the Levy but only those employers with a salary bill of more than £3 million will have their levy collected by HMRC.     The levy has been set at 0.5% of the salary bill, which will be collected on a monthly basis.   The first £15,000 is an allowance and will not be collected. 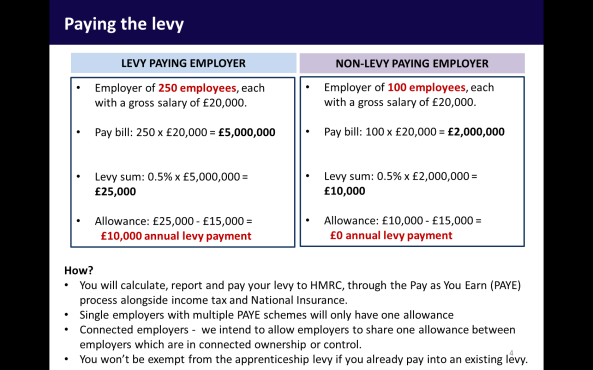 Remember as well that class 1 NICs have been abolished for apprentices under the age of 25 from April 2016.

Employers will be able to spend their levy funds to pay for the training and assessment of their apprentices and will access these via a new online portal called the Digital Apprenticeship Service (DAS).   Funds will be available to spend from May 2017 (after the first levy collection in April 2017).   The Government will top-up the funds by 10% each month, so for every £1 paid in, £1.10 can be spent.   Funds in the DAS will expire after 18 months unless spent on apprenticeships and this expiration will be on a first-in, first-out basis.