Recently within the Havering floating Support Team from Family Mosaic, Cheinah Sutherland, Helen Peters and Danielle Greatrex have set up a new homeless outreach project (HOP) to provide benefit and housing advice to the numbers of homeless people in the borough.

This service has only recently started and is still in the early stages.  However, a lot of work has been done in the community and we have been providing a drop-in service at the Havering Salvation Army.  In order to raise awareness for not only the HOP project but the homeless community within Havering; we joined up with YMCA for a night of rough sleeping (Street Easy Event).

On Friday 27th February from 6pm we attended the YMCA event to ‘sleep rough’.    The night consisted of “bed preparation” by way of box decorating, read “preparing your bed”,  making up a small fire for us to try to cosy around and keep warm until 10pm then to experience sleeping outside for the rest of the night in the freezing cold.

Throughout the evening we met other positive influences on the homeless community such as YMCA staff, Volunteers, Time FM (local radio Station) and the deputy Mayor.   The evening was a real eye-opener for us and gave us a taste of the everyday struggles homeless people have to face.   Although one evening cannot be compared to what the homeless community have to face daily, it was a small glimpse into their world and a chance for us to “walk in their shoes”.   We had agreed by choice to sleep rough but homeless people don’t have a choice and face this predicament night after night come rain, frost and cold weather. 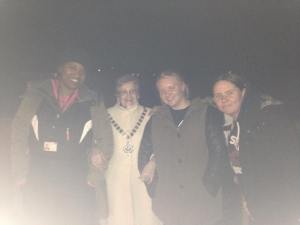 project.   The major challenges we endured was how cold it was and how homeless people deal with it.  Rough sleeping in that temperature had a profound effect on the three of us in just one night and we found that we were frozen before 11pm, despite having a sleeping bag to bed down into.   The idea of sleeping in doorways, on park benches, in cemeteries, behind buildings or in bins trying to keep warm was absolutely unimaginable and, as we were sleeping on private land, there was a fire and hot drinks supplied throughout the night, luxuries the true homeless can only wish for.

The evening had made us all evaluate our lives and has inspired us to do more for the homeless community we support within Havering.  The final amount raised has not yet been confirmed, but between the three members of staff who took part, there has been around £300.00 raised so far and counting.   The amount raised in life experience is priceless!

What do you think? Cancel reply